Welcome to Flash Editorials for November 23, 2012. I am Russell D. Longcore, owner and editor of DumpDC. Flash Editorials is presented by w w w dot Dump D C dot com. DumpDC is the world leader in secessionist thought. We show the world that secession is the only hope for personal liberty and property rights on the planet.

This was the week of Turkey Day, so not much happening in America except overeating. But before we go to the news, let’s talk about something called a ‘Black Swan event.” A Black Swan event was the subject of a book by Nassim Taleb entitled ”The Black Swan.” A black swan even is an event that is a surprise to the observer, nearly impossible to predict, has a major effect, and is usually only understood in hindsight. Got the concept? Now think about the turkey that adorned your Thanksgiving table. He recently had a Black Swan event. From his earliest consciousness, he was fed plentifully every day. Based upon his life experience, there was no reason for him to think that this lifestyle would not continue. Abruptly he was slaughtered. For the turkey, or for the pig that provided you your ham, there was no hindsight…no understanding of the event. 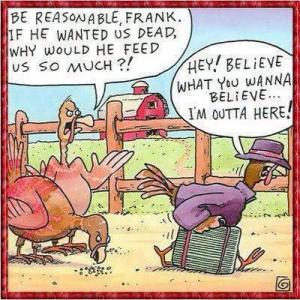 This Is A Black Swan Event.

As Soren Kierkegaard said, “There are two ways to be fooled. One is to believe what isn’t true; the other is to refuse to accept what is true.” Don’t allow secession to be a Black Swan event in your life.

Now, to the news.

The Nation I: I had an epiphany this week. I figured out why Washington and the Federal Reserve are continuing with Quantitative Easing III. Chairman Bernanke said it was to help the fragile economy. But that was only the latest lie. The Fed could not care less about the economy. The Fed is buying US Treasuries and dropping that so-called liquidity into the US Banking sector. But banking cannot loan that money to business at market interest rates. So, what does the banker do? He loans his money back to the Fed for a safe return, no market risk. But this financial circle jerk protects WASHINGTON from higher interest rates on its own debt. If DC had to start paying anything north of 4%, it would melt DC down entirely. All taxation and all borrowed money would have to go to service the debt. No money for any government program, including Social Security and Medicare. DC is just covering their own asses and kicking the can down the road just a little farther. They will deal with the future crash when it happens…just not today.

The Nation II: Is it just me, or have any of you noticed that changing the party in power NEVER changes policy? Could it be that the two parties are essentially one party? It would be one thing if one party stood for strict Constitutionality, and the other party rejected strict Constitutionality. But BOTH parties totally ignore that tattered old document and do whatever the hell they choose. Actually, the truth is that they do what they are TOLD.

Now that the election is over, President Stepin Fetchit and his Congressional Homeboy Posse are now getting the Mainstream Media worked up over the latest meme, which is the phrase “The Fiscal Cliff.” Now… a moment. Now, for you friends out there that don’t know who Stepin Fetchit was…here’s a little history. Back in the 1920s and 30s an black actor named Lincoln Perry played a character named Stepin Fetchit that was very popular in movies. The name was a play on words…the words that a slaveowner would say to his slave… “I need my umbrella. Step and Fetch it.” 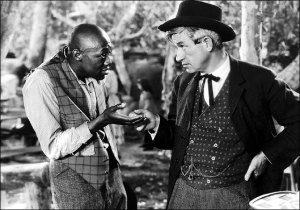 Stepin Fetchit and Will Rogers

This topic of the Fiscal Cliff was not discussed before the election, and it is almost as if the White House Press Secretary issued talking points in the briefing room for the reporters to carry back to their offices and implement. But now that the so-called Sabbath Gasbags (thanks Rachel Maddow) have done their duty and opened up the topic, the Republicans, starting with House Majority Leader John Boner, are lining up to make more compromises on keeping the spending going and raising your taxes. Both sides would get what they want if they would just shut the hell up and live with the deal they made in 2011. The Democrats would get huge cuts in military spending, and the Republicans would get automatic cuts in domestic spending. But BOTH SIDES cannot bear the thought of allowing the other side even the smallest victory. And even right after an election, Washington cannot abide the reality of big spending cuts sending the American economy into another tailspin. The scary part of this story is that the power elite talking about this so-called Fiscal Cliff doesn’t reveal how bad things are, and will help immunize DC from blame when the shit hits the fan. You can be certain that Washington will blame free enterprise, capitalism and the wealthy for the economic collapse that is at the bottom of that Fiscal Cliff.

International I: This week I saw news reports and alleged photos that were supposed to prove that Iran (who else) was helping Venezuela build intercontinental ballistic missile silos in Venezuela. When US State Department reps were asked about the story, they said they could not vouch for these reports. I think these reports are planted stories…probably by the CIA. Think about it. Who are DC’s two biggest thorns in the flesh? Iran and Venezuelan president Hugo Chavez. Doesn’t anybody else think it’s just too convenient that these two countries are supposed to be in cahoots on ICBMs? But whether the story is true or not…know what would make the story go away? Washington minding its own business and not pissing on all the other countries of the world and telling them it’s raining…that could make our enemies at least not wish us harm. But what do I know?

Business I: I am Founder of a private, secret, members-only Twitter group. We are limiting our membership to just 20 members, 5 are already in. If you have a Twitter following larger than 10,000, my group will give you exposure to over 200,000 tweets each day FOR FREE. If you want this kind of exposure for your Tweets, contact me on Twitter @russlongcore. Follow me, then leave me a direct message. We require members to sign a Non-Disclosure Agreement.

Here is tonight’s commercial message. Would you like to learn how you can make all your social networking PAY YOU! Let me introduce you to a new company named Solavei. Solavei just launched nationwide on September 21, 2012. They have created a company that will allow YOU to refer your friends and relatives and make money by doing it. You don’t have to sell anything. Simply post messages and links and let your friends, family and acquaintances look for themselves. If they like what they see and make a purchase, you get paid!!

Solavei’s first Value Proposition is this: Unlimited talk, text and data on a 4G nationwide network for $49.00 per month. No Contract. No Credit Checks. No Deposits. You can bring your phone and phone number with you. And enrolling takes about 5-6 minutes online. I saved $46 a month by switching! That’s $552 a year and I’m getting more that I got with ATT.

Think about this: Cell phone service is a life-essential service that nearly every person from age 10 to age 100 uses every day. And mobile phone users will not voluntarily give up their phone service. What would they do? Get a land line? That requires credit checks and deposits. So phone bills…like utility bills…will get paid every month even if other expenses get cut or eliminated altogether. That makes the business recession-proof.

Solavei’s business model is this: Refer people you know to Solavei. When those people sign up like you did, you will receive monthly commissions as long as those new customers remain Solavei customers. Solavei even has a plan whereby members can have their mobile phone service FOR FREE. How many people getting free phone service are going to switch to another carrier? NONE! No other phone provider can beat FREE, can they?

To learn more, go to http://www.DumpDC.com and look for this Flash Editorial article. Scroll down to the Solavei video, it’s only six minutes long. Watch it, then sign up TODAY!!

Economy I: The number of actual initial unemployment claims filed under state programs, unadjusted, totaled 397,691 in the week ending November 17th. This is a whopping decrease of 80,872 over the previous week and is attributable to Hurricane Sandy hitting the Northeast. The previous week jumped up by over 100,000 and dropped by 80,000 a week later. But the story is the number. Another 397,000 people just like you filed new jobless claims just last week. Just last week.

And about all those jobs said to have been created by the Obama Administration, or promised by schmucks like Mitt Romney. All jobs are not created equal. If you create two jobs that pay $10 an hour in the low-paying service sector to replace the high-paying engineering job in manufacturing that paid $50 an hour, you can truthfully say you created more jobs than you lost. But the economic output is not the same. This is the dirty little secret of the politician and job creation. And the only reason they can get away with this over and over is that the American people don’t know the difference and don’t know the numbers behind the headlines.

In Sports: The Macho Man took his final shot to the head last Tuesday. Famous Puerto Rican Boxer Hector “Macho Man” Camacho was sitting in a car outside a bar in San Juan Tuesday night when a gunman shot him in the head. Doctors have declared Camacho clinically brain dead. The other occupant of the car was also shot and killed. Camacho had a professional boxing career record of 79-6-3. He had won the world titles in the Super Lightweight, Lightweight and Junior Welterweight divisions. Camacho had drug abuse issues throughout his life, and police found cocaine in the car where he was murdered.

Finally, in Entertainment: I watched the movie “The Best Exotic Marigold Hotel” last night with The Redhead. British retirees travel to Jaipur India where they all stay in a fixer-upper hotel. There is no violence. There is no sex. There is no filthy dialogue. There is just humanity and love gently shown. Please rent this movie. There are a lot of spiritual themes in the movie that have nothing to do with any one religion. Carl Jung said, “You must give up the life you’ve planned for the life that is waiting for you.” This movie is all about that. See it.

That’s all for tonight. Thanks for watching. I am Russell D. Longcore. For all of us here at Dump D C: Good night and good luck.

Copyright 2012: Russell D. Longcore. Permission to reprint in whole or in part is gladly granted, provided full credit is given.