How do you explain Donald Trump’s appeal to the American voter? Let me give it a try.

2. Widely recognized celebrity who is NOT a politician.

4. Trump is outspoken and opinionated and won’t back down after he says something. He says things that the other candidates would never dare to say.

5. Trump is financing his candidacy out of his own wealth. America respects a guy who doesn’t beg for campaign contributions.

6. He’s fallible…has made mistakes, big successes and big failures. And he owns them…doesn’t blame others.

8. Trump already lives like a French king. His Trump Tower residence looks like the inside of Versailles, and his Florida estate Mara a Lago is one of the biggest and most opulent houses in the USA. Americans love that.

10. Americans are dead weary of the political process and the wimpy assholes that run for President. Compare Trump to John McCain and Mitt Romney if you need examples.

10.5. Apparently the America people don’t give a shyt if Donald Trump measures up to the label “conservative.” America likes a winner.

If Donald Trump wins in Iowa, he will likely win the rest of the primaries and caucuses walking away. And he is getting so much press that he can keep his money in his pocket. When you think about it, Trump could set a record for the least spent on a Prez candidacy.

In an effort to thwart the Trump juggernaut, the publishers of The National Review are releasing an issue entitled “Against Trump.” Here is a photo of the front cover. 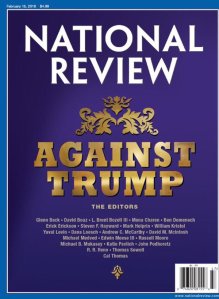 A couple thoughts about this magazine cover.

1. Top left shows February 15, 2016. NR doesn’t release issues ahead of time. I know this. I was a subscriber for years back in the ’90s. But there IS an Iowa caucus on February 1. NR wouldn’t be trying to sway the Iowa voters with this issue, would they?

2. NR is the leading neocon magazine in America, followed by the American Standard. The neocons are deathly afraid of Donald Trump. This may be the first shot, but won’t be the last.

3. Latest polls in Iowa show Trump whipping Cruz by 11%, 37 to 26. The neocons don’t like Cruz either, but cannot stand the idea of a Trump win.

4. A man is known by the friends he makes, and also by the enemies he makes. Trump is making friends with voters and his enemies are the movers and shakers.

Now we learn that the National Review publisher is a 501c3 non-profit corporation. Non-profits are expressly prohibited from publishing writings either for or against any party or candidate. That this “Against Trump” edition has been published violates IRS regs and actually places their tax-exempt status in jeopardy.

That is, if anybody gave a damn. The National Review only has about 170,000 subscribers, mostly here in the US. And I doubt if the IRS is going to do anything about this blatant violation.

We wish The Donald much success…and continued good health. Remember, the people who actually run this country are entirely willing to stage an assassination or “accident” when they are threatened. And Trump seems to be a threat.