They Have To Lie…It’s Required

I watched the presidential debate Tuesday night from Hofstra University. This is actually the first debate I have watched from start to finish. I have a few thoughts, as you might expect.

Read the following text very carefully. Once you get a few words in, you will likely recognize it.

“We hold these Truths to be self-evident, that all Men are created equal, that they are endowed by their Creator with certain unalienable Rights, that among these are Life, Liberty and the Pursuit of Happiness – That to secure these Rights, Governments are instituted among Men, deriving their just Powers fro the Consent of the Governed, that whenever any For of Government becomes destructive of these Ends, it is the Right of the People to alter or to abolish it, and to institute new Government, laying its Foundation on such Principles, and organizing its Powers in such Form, as to them shall seem most likely to effect their Safety and Happiness.”

This is from Jefferson’s Declaration of Independence, paragraph two, the first two sentences. Look at the photos below. The text above is behind the candidates on the wall as artwork. 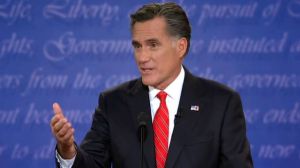 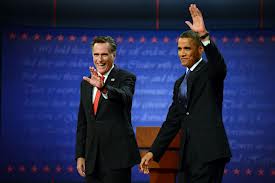 Bye now…we’re going to go braid each other’s hair and talk about boys.

While I was searching for these two photos, I discovered the same artwork in many of the “debate” venues going back many years. So I’m thinking that the Presidential Debate Commission used the D of I words over and over at debate venues.

Who cares? You should.

Those two sentences are ALL ABOUT REBELLION AND OVERTHROW of a tyrannical, despotic government. Later Jefferson writes that it is the DUTY of The People to “throw off such Government.”

Such powerful words and phrases should make the heart of every politician quake with fear of a People in their righteous indignation rising up and throwing off such government. It’s almost as if Washington’s power structure is saying “we DARE you” to the electorate. Or perhaps they are simply pointing out what chumps and suckers the American citizens are.

Instead, The People Fear the Government. The politicos brazenly hang the quote up behind themselves as wall art and blithely go about their despotic business. And what is that despotism, eloquently exhibited last evening by both candidates?

It Is Never Ending LIES in public. Then doing whatever the hell they like. Remember the old saying, “Hypocrisy is the homage that vice pays to virtue.”

Last night, both candidates lied every time they spoke. They were well-done lies…cleverly spoken lies…but lies nonetheless. Both candidates were Artful Dodgers last night. They spoke in wide generalizations and used connotation words…but almost NO SPECIFICS. Further, every subject touched last night concerning what each candidate would do is entirely outside whatever Constitutional restriction may have ever existed. In fact, the word “Constitution” was not used by either candidate, the moderator nor any person asking a question throughout the entire televised event.

Dear Readers, the entire American political system is built upon lies. To wit:

The American political system REQUIRES adherents to lie. Our monetary system, which is fiat currency and fractional reserve banking regulated by the Federal Reserve, is a total fraud. Any banking system that permits, even enforces a reserve amount less than 100%, is a lie. So, if you support a system built upon lies, does it not naturally flow that you must lie to maintain the system? Truth would bring the system down.

What would Americans do if the Presidential candidates told the truth about that list above?

• The Constitution has been dead since the early 1800s.
• The Dollar is going to collapse because Washington has borrowed too much, printed too much paper money and decoupled the Dollar from any underlying hard metal. The nations of the world are rejecting the Dollar as world reserve currency.
• Fractional reserve banking allows banks to create money from thin air.
• America is going bankrupt supporting troops around the globe and funding unnecessary military technology and hardware. Over 4,000 men died in combat in the Middle East for nothing.
• Social Security and Medicare are going insolvent and will accelerate.
• The real unemployment rate in America is over 20%.
• Borrowing half of the amount Washington spends is insane.
• Military personnel that obey unlawful orders are not heroes.
• Iran is only developing fissionable materials for electric power and medical technology, and that has been proven.
• China owns Washington entirely and DC knows it.
• Only the free market creates jobs, politicians only get in the way.
• Washington and its contributors LIKE illegal workers and don’t want to change it.
• Israel manipulates the White House and Congress at will because Israel knows that Christianity wants Jesus to return as the Messiah.

Wouldn’t we all expect that the American people would rise up and throw off such Government? No. There WAS a candidate that DID tell the truth about all those issues. His name is Dr. Ron Paul. Look where he is today.

Sadly, after 59 years on this planet, and an adulthood of watching politics in America, I hold no such hope. Americans don’t care. In fact, Americans LIKE being lied to. It that were not so, why would Americans enthusiastically support men like Obama or Romney, Ryan and Biden? Why would over 100 million go to the polls in November and vote AT ALL?

In the Free Republic of North America, we start out with truth. We write a truthful Charter. We establish a truthful government with limited, MEASURABLE duties. We outlaw a central bank and require 100% reserve banking. We create the Frona, a money of gold, silver and copper. We establish a citizen militia that stays within our borders.

Because FRONA is established in truth, our leaders cultivate and practice habits of truthfulness. Truth is revered and required to live in FRONA. Truth is the yardstick by which all human action is measured.

That is what you get when there are standards and morals in your country.

Secession is the only hope for mankind to enjoy individual liberty and property rights in North America.

Copyright 2012 Russell D. Longcore. Permission to reprint in whole or in part is gladly given, provided full credit is given.