Reversing the Tide of Compulsory Niceness

(Editor’s Note: I enthusiastically encourage you to go to Amazon.com, click on Kindle and type in “Fred Reed.” You’ll find all of his books there. Buy a few. And while you’re there, type in Russell Longcore and you’ll see my book also.)

OK, so eight years ago I got to Mexico, shortly after having spent another eight years as a free-lance police reporter on contract to the Washington Times, riding with the cops in various urban blasted heaths that groaned under the usual despair and injustice. Suddenly having leisure, I figured I’d read some crime fiction. You know, bludgeonings, cityscapes littered with corpses, psychopaths left and right, and a growly hard-eyed detective with the personality of a leather boot. Phillip Marlowe, Mike Hammer, that kind of gumshoe.

It wasn’t to be. All I found were tales of white wine and cheese, of sensitive detectives—sensitive?—who obviously had never seen the inside of a police car. It was wrong. Wrong, wrong, wrong.

I decided I’d write the stuff myself. Why not? I was unemployed. I was a writer—barely, some would say, but today that’s enough. At least I knew the difference between a Remington 870 and a police-rebuild Crown Vic. I had kicked in doors in Chicago and been down a thousand dark alleys full of people your mother wouldn’t like at all. I knew that cops didn’t drink white wine. What the hell. I’d give it a try.

So I invented a totally imaginary charcacter, Robert Dawson, a free-lance police reporter working on contract to the Washington Herald. Dawson was a guy’s guy, an ashen-souled news weasel of the old school, before reporters began to come from Princeton. He was an ex-Marine, had seen too much to believe in any of it. Maybe he drank too much. Sometimes he thought maybe he didn’t drink enough. Washington will do that to you. 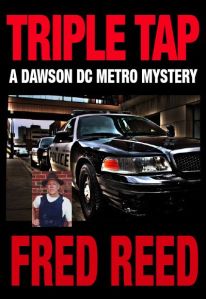 As I got to know Dawson, I discovered that he owned a bird named Dipstick who thought he was a microwive, beep-beep-beep—and had a girlfriend, Attila the Liberal, a cute fluffy-haired number with a large brain who worked for one of the secret three-letter spook agencies. He also had a highly altered ’57 Chevy, Ruby the Bright Red Teen-age Orgasm Bucket. Ruby dynoed at 450 brake horsepower. A swell lady.

I decided that writing my old cop column (called, not too imaginatively, Police Beat) was actually good training for crime fiction. A column forces you to write lean and tight. It is easy to burn 750 words and find that you haven’t said anything. You need a grabby lead. News editors used to give cubs the classic example, “My god,” said the queen. “I’m pregnant again. Who can it be this time?” I couldn’t match that, but I came up with things like “The Saturday night we found Giarca with his face peeled, I was walking a foot beat with Mulroney in the glitzy section of Georgetown along M Street.”

I hope this infuses you with a desperate longing to know why Giarca’s face was peeled.

So I wrote a couple of novels,Killer Kink and Triple Tap, and tried to peddle them in New York. It didn’t work. These days God couldn’t get an advance for the Bible. Editors told me that hard-boiled was out. The market was for smart female dectectives from Swarthmore who knew what fork to eat snails with. Nothing wrong with that, I thought, but it weren’t Dawson. He doesn’t do snails. I put the books in a drawer and forgot about them.

Meanwhile Jeff Gutenbezos was inventing Amazon, and then the Kindle, and then Kindle Direct Publishing. With KDP you can publish your world-shattering novel on Amazon in about a week. Learning of this, I dragged Dawson out of his drawer and decided I kinda liked him. An incorrigible sardonic wise-ass, but a decent sort, though he would never admit it.

Now, Amazon is one killer outfit. In the book racket it is eliminating the middle men—publishing houses, editors, printing plants, trucks and, alas but eventually, book stores. I picture Random House as a dinosaur uneasily wondering why the water in its swamp is getting cooler.

Money has a lot to do with it. Kindle editions even of best sellers cost half of the print price. While it is not yet true that everybody and his pet goat has a Kindle, things gallop in that direction, thumpety-thump. You probably have noticed more goats reading on the subway. Project Gutenberg, which offers free downloads of huge numbers of books out of copyright, uses the Kindle format, which means that New York can’t charge you fifteen bucks to read Mark Twain or Cervantes.

Offsetting the still unstaggering number of Kindles is that on Amazon your book is instantly available to all of them. Getting a physbook on shelves in England, Australia, Battambang and Tasmania is close to impossible in a short life. It’s automatic with Kindle. If I were Random House in my chilling swamp, I’d pour in some gin and vermouth and sell myself as a martini. There would be more future.

And with KDP you can get royalties of seventy percent. Do you suppose that Gutenbezos is trying to attract writers?

I knew most of this. What I didn’t know about was the new approach to pricing. Today, a physical book goes for twenty-six rapidly withering green ones, the Kindle version for maybe twelve. However, it turns out that books priced way low— $2.99 (Dawson’s price; he would understand that any man can be bought)—or lower are making lots of money. The principle is that people will drop a couple of bucks without worrying about it. They won’t pony up ten times that amount.

And crime fiction is apparently the hottest selling genre on the net. Science fiction, I’m told, is next.

The fly in this happy ointment is marketing. I had friends who had worked years on a splendid tale of something or other, put it on Amazon, and sold seven copies. You still need New York, they said despondently. But then kids began to write awful misspelled ungrammatical Harry Potter facsimiles, price them at ninety-nine cents, and make bundles.

Apparently the social media like Facebook, all of which I abhor, are useful in flogging ebooks. I would rather have untreatable tuberculosis. I thought of sending a letter to my subscription list, “Buy the book, or else. I know where your children go to school.” A lawyer friend told me that this was extortion and involved prison time. To me this looked like restraint of trade. The government should stay out of free enterprise.

I put both books up on Amazon, and will see what happens. If they sell more than seven copies, I will inform readers of the progress of the thing, and provide any useful hints I may discover to help others similarly prosper. Meanwhile I am working on a drink called the Random House Dinosaur Martini. Shaken, though not yet crushed.