Almost forever, the record for stupidity was held by Lumbo, a Cambrian trilobyte born to an early family of retarded trilobites. Lumbo also had Down’s Syndrome. It ws an unbeatable combination. Nobody and nothing was as slow as Lumbo. It was thought that he would hold the record for all time, but then came the governor of Texas, Rick Perry. He thinks it might be a good idea to invade Mexico.

The governor thinks, barely, that such a martial lunge might help rid Mexico of drugs, or do something about immigration. He thinks it should perhaps be done with the permission of the Mexican government. It is my hope that Washington will not adopt the governor’s idea, but, given America’s penchant for lurching into catastrophic wars, perhaps we should examine the notion for advisability.

The governor’s wise plan begins by embodying the mistake the Pentagon always makes when it sets out to lose a war, which seems to be every time it holds a war. He, and it, begin by having no faint grasp of the people to be invaded, or of people at all.

Soldiers have difficulty with the notion of people, of citizens, of populations, who are mere impediments to the proper management of a swell war. The military longs for mechanized battle in which men in machines destroy other men in other machines, tank against tank, fighter plane against fighter plane, in a spirit of simple-minded adolescent romanticism. You know, battle-scarred tanks growling across the Algerian desert, against a flaming red sunset burning out to night, desert wind blowing scarves of heroic etc. People don’t figure in this dream, which is why the results are so regularly dismal.

Now, some practical considerations, a kind traditionally of little interest to military men:

You don’t just sort of invade Mexico as an abstraction. You have to invade an actual part of it. Which?

Well, you could try the cities thick with narcos: Tijuana, Juarez, Culiacan, Ciudad Victoria, all the gang. Good idea, that. As any intelligent officer will tell you – one was reported in Anhalt-Zerbst in 1654, but this was never confirmed – fighting in cities is not a lot of fun. The narcos have AKs and RPGs. They are expert at urban ambushes. They know the cities. They speak the language. They can fade into the population. Consequently frustrated GIs, quickly coming to view the population as subhuman, will begin killing people at random and…have we seen this before?

As an equally unwise plan, the good governor might advocate sending troops after the narcos in the wild, in the Sierra Madre Occidental, up around Copper Canyon, the Barranca del Cobre. Have you seen the barranca country? I have, on the Chihuahua Pacific railway from Los Mochis to Chihuahua. It is like Afghanistan, but with difficult terrain and tree cover. Roads are few. There are canyons in which you could drop the Grand Canyon and have trouble finding it the next day. Did I mention AKs and RPGs? Trees? Rocks? Things to hide behind? 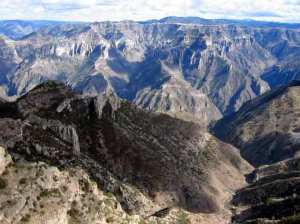 What the Pentaloons don’t understand, being armed Boy Scouts who believe their own propaganda—“Ooo-rah! Yes sir! Yes sir! Can do, sir!” is that they usually can’t. The chief reason is that people really, really do not like American soldiers invading their countries, wrecking cities and killing their children. The military, which thinks at right angles, cannot wrap its mind around this difficult thought. Thus Americans invariably begin by thinking, “We are right. We are for democracy. We are trying to help these people. Therefore they will love us.”

The second step to disaster is to set up a puppet government, by purchase or intimidation, declare it an ally, and assert that America is helping the legitimate government of a beloved fellow nation. Think Cambodia, Laos, Vietnam, Iraq, Afghanistan, Pakistan, and note that the Governor Perry says he wants to invade “with Mexico’s permission,” which means puppetizing the government. Of course no government that supports invaders who kill Pablo’s three-year-old and her dog is going to enjoy a whole lot of legitimacy.

The approach doesn’t work, this being regarded as a minor defect by military minds. It’s the glory of the thing, the swoosh and bang and zowwee that count, not practical concerns like winning. But…does it seem salient to you that in all of our hobbyist wars, our locals…our Khmers, our Viets, our Afghans, and so on…fight poorly, while our enemies are passionate and stubborn? Note that after ten years our Afghan soldiers aren’t ready and disappear with their rifles, the Pakis collaborate with the Taliban and hate us, and the Iraqi police are permanently incapable.

Why might this be? Because, when you force part of a country to kill the other part, not too much enthusiasm ensues.

An essential ingredient in our wars is underestimation of the enemy, reflecting a general American contempt for everybody else. Cheese-eating surrender monkeys, that sort of thing. The Viet Cong were rice-propelled paddy maggots who didn’t have a single B-52. Iraq would be a cake walk, the Afghans were louse-ridden towel-headed farmers, and so on.

An infantryman's paradise, or gateway thereunto

Still, it is perhaps worth noting that as the US army lowers recruiting standards to reflect flabby American males, the Mexicans work construction. In the barranca country you find hard and hardy people, Tarahumaras and tough farmers who have trucks now thanks to the marijuana crop. Soft they are not. Mexicans have fought long and bloody wars—the Revolution, the Cristero War, the current drug wars in which 29,000 have died since 2006 in armed conflict (which suggests that there are a whole lot of them and not afraid to fight, doesn’t it?). Sound like Afghans?

Further: Mexicans, all Mexicans, are violently hostile to any invasion, on any terms at all, by the US. They’ve been down that trail before. I mentioned the governor’s idea to my (Mexican) wife. I’ve never seen her face so hard. This is universal. If you want to see a united Mexico, send the GIs.

The Mexicans are not as reliably hostile to the traffic in drugs, or to the traffickers, as Washington would like. The common attitude is that if the gringos don’t want drugs, why do they buy them? Why is it Mexico’s problem? The traffic has brought relative prosperity to places formerly without electricity. In a country not enamored of a corrupt government, the narcos not infrequently are seen as Robin Hoods. Various bands make a living singing narcocorridos, songs glorifying the traffoclers: Los Tigres del Norte, Los Tucanes de Tijuana, La Sombra Norteña.

Here we come to the final error of American military interventions: the belief that everybody wants to be like America, that they want democracy or are capable of it, that we just have to show them how we want them to live and they will gratefully do it. Ah, fond hope. We are going to make Afghanistan into a democracy, an idea as probable as making a frog into a television set. In Afghanistan the military invaded Marjuh and said it was going to impose a “government in a box,” whereupon an Afghan town would be just like a village in Iowa. Oh sure. Any day now. And in Mexico the Mérida Initiative is going to produce honest police and judges, whereupon Mexico will resemble Switzerland.

Oh God…Lumbo is back. Some good advice to the Joint Chiefs: Stay the hell out.