Police and Military Working Together to Oppress Americans

(Editor’s Note: Seceding states are going to have one hell of a time re-training their law enforcement personnel to un-learn the para-military style they now embrace. One of the principal reasons you see military hardware on city streets is the Federal/military-industrial complex finding another market for their instruments of death. Sweeping changes will have to be written into new criminal law for the new nation. Decriminalizing drugs and ending the so-called War on Drugs would be a good first step.)

The concepts of military service and public police service are worlds apart, for good reason. Today in America, we are currently witnessing the culmination of a decades-long trend that has introduced the language, weapons, and tactics of the overseas battlefield onto the streets of America. 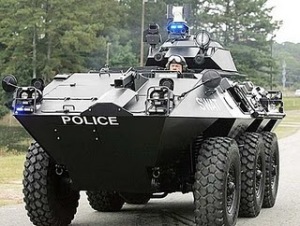 Do you know how fast you were going?

The planned coordination between military forces abroad and public forces at home further threatens to subvert the very social fabric upon which America was built, resulting in a betrayal of The U.S. Constitution and the American people.

The military is designed to be a last-resort option when all diplomacy has failed. Military personnel and munitions should be deployed with a heavy heart, because it is understood that the military task is one of enemy annihilation. The weapons used by the military are developed to “shock and awe” on every level. Pyschological warfare and espionage is often employed first to soften up the enemy before unleashing an array of high-tech weapons that range from pain compliance on the street level, to bombs rained from above.

The typical military serviceman is a brave soul who has trained physically and mentally to perform under the constant stress of battlefield conditions. However, this stress-training, much like any of the martial arts, can result in a non-questioning live weapon who must kill or be killed when placed in a threatening situation.

Additionally, their prison-guard-like duties promote attending to their stated enemies as hostile, criminal, and subversive. The population of the enemy country are called civilians, as they are not afforded any legal protection that might be owed to citizens, and any deaths can be written off as “collateral damage.”

Thus, military training inculcates values of aggression, intimidation, and the use of excessive force if it means self-preservation in a world where might is right, so long as it means Mission Accomplished.

Domestic Peacekeeping and The Constitution

Police, on the other hand, are in service to the domestic population and the U.S. Constitution. They swear an oath to the local community, and are paid by citizens to be experts in well-considered evaluation and the peaceful resolution of conflict. Their duties comprise those of humility: patrolling a neighborhood to ensure restfulness; rescuing a cat caught in a tree; removing a threat when there is a plea for help.

The Constitution specifies their unique role in tending to issues within the nation’s borders in the 9th and 10th Amendments, by prohibiting Federal intervention in domestic law enforcement duties. However, through legislation and national emergency directives, the protection against a Federal usurpation of power has been all but erased. In fact, the Federal government has never had more power than it does today to bring the military into the daily lives of its citizens.

Where are we today?

I have spoken to retired police officers who remember a world where it was considered a failure to draw a weapon unless under direct attack. Even if such an action was required, the result was nightmare inducing. Today’s police seem to have lost such empathy. Police are rarely a welcome site these days, as they are often black-clad, brandishing military gear and weapons, and applying military force over such non-violent infractions as traffic stops. Police are being equipped and trained as if they are an occupying force, and the results have been predictably disastrous.

Additionally, local police are being issued directives encouraging them to see select members of their communities as potential domestic terrorists. This threat assessment language is the exact spur needed to create a feeling of impending attack. This has led to inland checkpoints, where police, military, and the American people are being desensitized to this absolute perversion of American values and laws.

The traveling tyranny of the G8/G20 shows us where this road can lead. When the creator of an organization called “The Love Police” is detained and tortured, journalists threatened with rape, sound cannons deployed, and women are attacked by police dogs . . . anything is possible. Military and police alike are indoctrinated to adopt a stress-inducing frame of mind that leads away from peaceful resolution and toward this type non-thinking assault.

The U.S Congress has been instrumental in allowing this change of mindset to happen. They have long allowed the Drug War to be the excuse for minimal oversight of the actions of SWAT and the DEA, permitting daily paramilitary-style assault raids that terrorize our citizens. The cases of home invasion (sometimes mistaken identity) have resulted in unconscionable atrocities. The War on Terror makes things exponentially worse, as the “war without end” can come home to roost.

The ultimate betrayal has occurred on American soil, just as it has in many other countries throughout history. When the military and police begin to abandon their codes of honor, mass enslavement is the inevitable result. We need to take action now and ask our police and military to remember the oaths they swore not to obey any orders that will lead to our oppression. The real enemies are those who give those orders.