All You Need Is About Four Percent

The general consensus about Colonial history is that the colonies rose up in a united front to secede from the British Empire. The stories we hear get us thinking that all the colonists were fed up and wanted to be free from the King’s tyranny. But that’s not what really happened.

Some scholars have determined that as few as 10-15 percent of the colonists supported the secession and Revolutionary War. You must remember that colonists were FIRST British subjects, then became secessionists. There were big chunks of the colonies that supported the King and wanted nothing to do with separation from England.

So, history shows us that liberty can be won for all by a select minority.

The Texas Nationalist Movement is currently pushing a petition drive in Texas. The TNM wants to force a “yes or no” vote on whether or not Texas should secede from the Union and become an independent nation. They are working to amass hundreds of thousands…perhaps millions of signatures of Texas citizens on petition sheets. They intend to stage a media event on the first day of the 2011 session of the Texas Legislature, at which they will present the petitions to the proper authorities in Austin.

This is a well-planned, well-organized effort by the TNM. They are light years ahead of any other American state in which citizens are contemplating secession. If the strategy to force the vote is not successful, it will not be for a lack of heroic effort.

I’d like to offer a ray of hope as the TNM moves forward: To all in the TNM leadership, and all of the TNM members working to get those signatures, keep in mind that you don’t need 50% plus 1 of the voters.

All you need is about 4 to 6 percent to win.

Here’s a little something I learned from a wizened old political consultant. It’s a formula on how most elections pan out. Local or national, the numbers work about the same, and they’ve worked this way for decades.

Let’s draw a target…kind of a bullseye. Then we’ll sort it out and see what the rings mean. Forgive me for my freehand drawing skills, but I think you’ll get the idea. 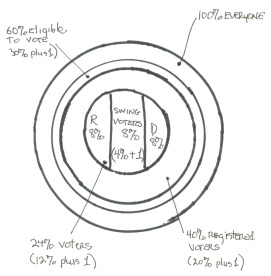 The outer ring represents 100% of the population of Texas.

The next ring represents the 60% of the population that is eligible to vote. Notice that I did NOT say “Eligible Voters.” I’m saying the people over 18, not in jail, not convicted felons, not resident aliens, not illegals. That group is about 60% of the population, which means that about 30% plus one is a majority. But you don’t need that many.

The next ring represents the registered voters, which are 40% of those eligible to vote. That means 20% plus one is a majority. But you don’t need that many.

The next ring represents the actual voters at about 24% of the eligible voters. So, 12% plus one is the majority. But you don’t need that many.

That leaves the swing voters at 8%. They are the “undecided” voters that you have to convince to vote with you.

So, in order to win the referendum on Texas independence, the pro-independence side only needs about 4% plus one vote to win. You could say that, since we’re talking rough numbers, the pro-Texas side needs 4% to 6 % to win.

With 24 million residents, my calculations are that the TNM needs to deliver about 461,800 of the swing voters to submit “Yes” votes.

My numbers could be off, but the example I’ve shown is not wrong. Perhaps the subject of this vote…Texas independence…will cross party lines. That remains to be seen. But the example I’ve given here has held true for decades in all manner of small and large elections and referenda.

Hey…if I’m wrong, point it out to me. I’m open to correction.

But if this example is accurate, the TNM could actually bring about an historic referendum and outcome. Just think…Texas Independence in our lifetime!

Secession is the hope for humanity. Who will be first?

© Copyright 2010, Russell D. Longcore. Permission to reprint in whole or in part is gladly granted, provided full credit is given.